At the end of September DJI introduced a new mulitcoper named Mavic Pro.
Some days ago the DJI Go App 3.0 for iOS and Android has been released for the new Mavic. Time for a reverse engineered look at the new app. 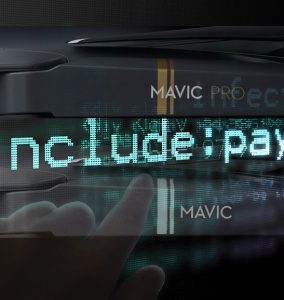 At first we take a look at the new DJI software for the Mavic. As expected a lot has been done. Internally DJI named its new OcuSync transmission standard LightBridge2 / Airlink. (It seems LightBridge2 was not good enough for the sales guys – airlink is probably a trademark of Sierra Wireless. And Lightbridge2 already is a DJI product)

The OcuSync transmission bandwidth in the ISM band 2.4 Ghz was increased from 20 MHz to 40 MHz. This step actually appears logical because 1080p has about twice the pixel number compared to 720p. Now a distinction is made between a low latency mode and an HD mode. 1080p with low latency is not provided.
The DJI developers call the mavic KumquatX. Some more (interesting) facts: All products are named after fruits (except for the phantom 3 4K – which is just called P34K). The famous litchi app for ios and android isn‘t named litchi by chance. This is also a DJI product name.

Investigating the app I discovered a strange detail. There is another Kumquat. Actually DJI integrated another copter almost completely into its new DJI Go app.

There is another hint in this app internal table:

If DJI follows its current naming scheme another Mavic (Advanced) is being planned. This one will just be called Mavic.

At first glance the differences between the two models only seem to affect the 1080p transmission. At least from an in-app point of view. This suggests that probably the new Mavic will only have a different camera.
The new Mavic already is deeply integrated into the software and already available in the UpdateManager and the Simulator.

Looks like we are expecting a new Mavic series copter in the next few weeks. DJI seems to be serious …

One more thing: For Mavic the Phantom channel hack is still possible!